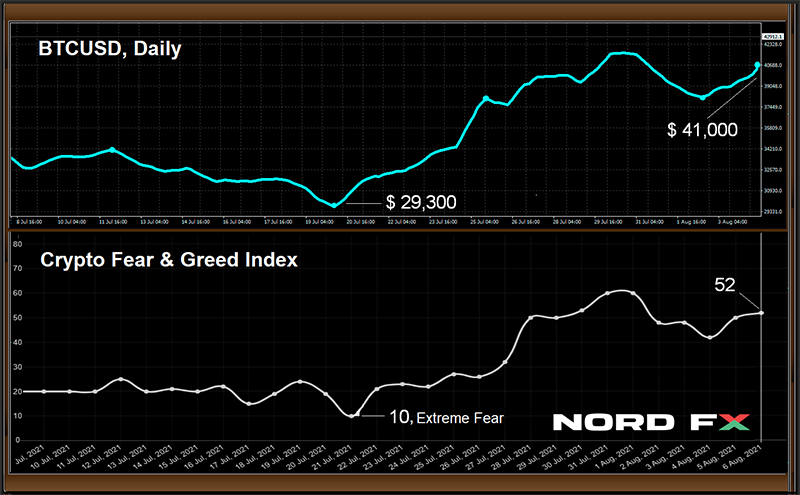 EUR / USD: it's All About the Labor Market

The EUR/USD pair drew another wave of sine waves on the chart: it fell by the same amount in the first week of August as it rose in the last week of July.

Statistics from the US labor market set the tone for the week's trends. In anticipation, the pair was moving in the sideways range of 1.1850-1.1900 throughout the first half of the week. The bears tried to break through its lower border on Wednesday, August 04. However, amid disappointing private sector employment statistics from the ADP, the pair reversed and, conversely, aimed at a breakout of the channel's upper border. But this attempt, now by the bulls, failed. The reason was the record growth of business activity in the US services sector from ISM: it rose to 64.1 in July.

After pulling back to support 1.1830, the pair froze in anticipation of the release of non-farm payrolls (NFP), data on the number of new jobs created outside the US agricultural sector. This data is traditionally published every first Friday of the month. And the report released on August 6 did not disappoint investors. Moreover, some analysts called it "stellar" as it showed employment growth of 943 thousand against the forecast of 870 thousand. In addition, the unemployment rate fell from 5.9% to 5.4%.

The market responded immediately with a surge in the US currency, as according to Fed statements, the timing of the monetary stimulus program (QE) and interest rate hikes are directly dependent from a crackdown on inflation and a full-fledged recovery in the US labor market.

Impressive labor market data allowed President Joe Biden to say his approach to economics is working. True, the White House host urged not to relax and stated that there was still a lot of hard work to do. Moreover, the country has to extinguish a new wave of coronavirus associated with the Delta strain. The president believes that the number of new cases of Covid will initially rise, but then decline, thanks to the current scale of vaccinations. And therefore, the US economy will not suffer as much damage as it did before.

Biden's words also went into the piggy bank of those waiting for the Fed's policy tightening soon. For example, analysts at Canadian investment bank TD Securities forecast that the dollar will perform better against currencies whose national central banks retain a dovish mood.

The overall picture for the pair looks bearish, something 70% of experts agree on. They believe that the EUR/USD pair intends to test the end-March low of 1.1700 once again. If it succeeds, it will encounter a strong support in the 1.1600-1.1610 zone. This forecast is supported by 100% of trend indicators on both H4 and D1. But the oscillators note the weakening of the bearish onslaught. 10% of them have taken a neutral position on H4, and 15% are giving signals that the pair is oversold. There are even more of them on D1, 35%, which indicates a possible quick correction to the north. The remaining 30% of the experts are also expecting it. Moreover, in their opinion, the pair may not just limit itself to correction, but return first to the channel 1.1850-1.1900, and then rise to 1.2000. Although, of course, this is not a matter of the next few days.

As for the macro statistics for the coming week, here we can note the release of data on the consumer market in Germany and the United States on Wednesday, August 11. In addition, the University of Michigan Consumer Confidence Index will also be released at the end of the five-day period, on Friday, August 13. It is predicted that it may show a slight increase, which will slightly strengthen the US currency.

GBP/USD: Waiting for the Start of QE

The Bank of England held a meeting on Thursday August 05, which, as expected, offered no surprises. Even with the good pace of recovery from the pandemic and rising inflation, all basic monetary policy parameters remained unchanged. The regulator kept the interest rate at a historically low level of 0.1%, and the quantitative easing (QE) program at £895 billion.

The GBP/USD pair was never able to break the record of 30 July and was held in 1.3870-1.3935 for the whole week. An attempt made, in parallel with the euro, to break through its upper border on August 4, ended in nothing. As a result of the week's session, thanks to strong US statistics, the pair returned to the bottom of the channel, where it placed the final point at 1.3875.

The main interest for investors was not the predictable decision of the Bank of England, but the subsequent comments of its management regarding the future monetary policy. As mentioned above, the country's economy is confidently moving along the path of recovery. According to the data released earlier, inflation in June rose to 2.5%, exceeding the target level of 2%. The government is managing to cope with the next wave of COVID-19, so no new restrictions or lockdowns are yet to be seen. And although the Deputy Chairman of the Bank of England Benjamin Broadbent uttered a mysteriously ornate phrase that “moderate (!) tightening is likely (!), maybe (!) will be needed”, it did not impress investors. Especially as Broadbent said inflation in the country will rise 4% in Q4 2021 and Q1 2022.

Therefore, according to 75% of experts, any signal about a possible transition from QE to a tighter policy, will be enough to lift the GBP/USD pair to 1.4000. 60% of oscillators agree with this position, but only 40% of trend indicators on D1. There is even greater discord in the readings of the indicators on H4. Graphical analysis on this timeframe first draws a fall of the pair to the 1.3800 horizon, and then a return to the highs of the end of July in the 1.3980 zone. It is clear that the support/resistance levels along the way will be the 1.3870-1.3935 channel boundaries.

As for the events of the coming week, we can single out the publication of preliminary data on UK GDP for tQ2 2021 on Thursday August 12. This figure is projected to show a very significant increase, from minus 1.6% to plus 4.8%. And if the forecast is met, it will give the pound strong support, thus becoming a signal to the possible start of the QE program cuts.

Starting on Wednesday August 04, the yen surrendered one frontier of defense after another, losing 150 points. The USD/JPY pair jumped from 108.71 to 110.21 in just three days. And, of course, it's all again to blame the same growing US labor market, pulling the yield of American treasuries. As mentioned above, this indicator approached 1.30%, which hit the Japanese currency hard.

Most experts (55%) expect the pair to return to support at 109.00. However, according to 45% of analysts, the pair has not yet exhausted its upside potential, especially if the yield on 10-year US Treasuries continues to rise. This forecast is actively supported by 100% of trend indicators on both timeframes, 65% of oscillators on H4 and 50% on D1. Graphical analysis on D1 predicts that the pair will finally be able to reach the coveted 112.00 level. The resistances on the way to this target are 110.65, 111.10 and 111.65. 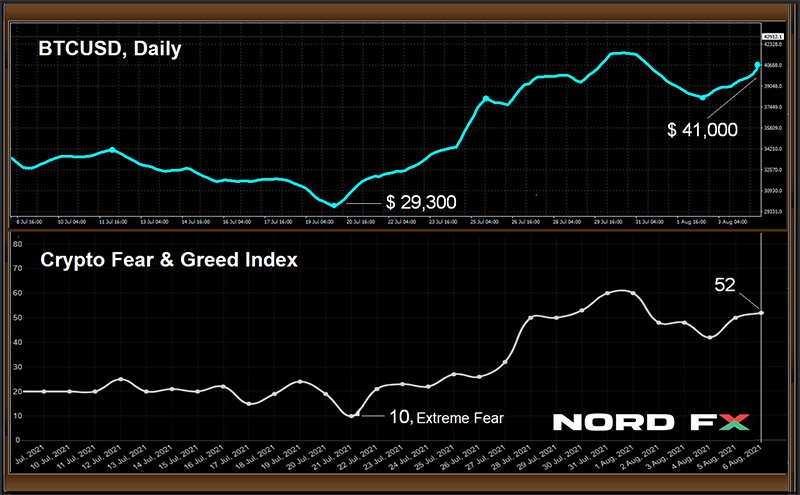 The digital currency market is optimistic. Investors hope that the crypto freeze has passed, and instead of a crypto winter, a crypto spring has immediately arrived. Indeed, over the past two weeks, a lot of green leaves have appeared on the "tree" of bitcoin quotes, of which there are much more than yellow-red dull autumn ones.

In addition to the quotes, major influencers statements and macro statistics support the market optimism. Recall that it was these factors that served as the main drivers of the bitcoin rally last fall.

For example, MicroStrategy chief Michael Saylor, said in an interview with Bloomberg TV that bitcoin has “the greatest growth potential and the lowest risk” and could therefore become “the property of the future” which will be possessed by everyone from small investors to big tech companies and governments. We see a future in which digital gold will become the basis of technological innovation in Apple, Amazon and Facebook and will take place on the balance sheets of corporations, cities, states and countries," the billionaire explained.

Analysts at one of the largest U.S. financial institutions, Bank of America, confirmed Saylor indirectly. They believe that the recognition of bitcoin as an official means of payment in El Salvador can give this country a number of serious advantages. This could potentially reduce the cost of remittances from abroad, which account for almost a quarter of El Salvador's GDP, and positively affect the incomes of the country's citizens. The analysts have called the democratization of financial services another advantage of the introduction of bitcoin, since approximately 70% of the adult population of the country does not have bank accounts. El Salvador can also attract direct foreign investment flows, becoming a major cryptocurrency mining center.

State Street, the second oldest bank in the United States with an investment portfolio of $3.1 trillion, plans to begin providing cryptocurrency related services. It is about helping private foundations to carry out transactions with digital assets and provide them with information on the optimal price levels for entering the crypto market.

But of course, things are not limited to State Street alone. Michael Miebach, CEO of payment giant Mastercard, said that cryptocurrencies must enter the banking sector on a large scale. Moreover, his company will do everything possible to become an integral part of the crypto space. "Mastercard is ready to become an assistant for the authorities in this task. We are ready for experiments and testing of digital currencies, so that in the end banks begin to work with them," said Miebach. And he added that Mastercard will allow 1 billion of its users to pay with digital assets in more than 30 countries around the world in 2021.

Recall that another payment giant, Visa, is already working on the integration of stablecoins into the global economy.

In terms of statistics, according to the research resource Glassnode, there was a sharp jump in the total number of active bitcoin addresses at the end of July. The increase in the indicator was about 30% in just a week. And the purses of "whales" accumulated 9.23 million BTC for the first time in history.

A further rise in prices is predicted by such an indicator as the ratio of put and call contracts in the bitcoin derivatives market. Low values of this indicator indicate that investors are supporting the rise in prices. And it fell to an 8-month low on August 01, that is, it is below the April value: the very one after which BTC surged above $60,000.