EUR/USD: In a State of Uncertainty

When giving their forecast a week ago, 20% of analysts were in favour of a decline in EUR/USD, 50% voted for it to rise, and 30% were neutral. As a result, 80% of those who pointed north and east were right. After starting at 1.1600, the pair first rose to 1.1668, then fell to 1.1616, and then moved sideways in this channel. After Friday's speech by the Fed Governor, the pair dropped to the bottom of this trading range but finished almost in its middle at 1.1643.

According to Reuters, Jerome Powell said it was time to start reducing asset purchases but added that it was not yet time to raise rates. In his view, high inflation is likely to continue into next year, but the central bank expects it to return to the 2% target.

The figures coming in the week from the US labour market could be considered positive. This was due to a larger revision of the previous data on repeated claims for unemployment benefits, from 2.593K to 2.603K. Thus, the current number of 2.481K showed a decrease of 122K instead of the forecast 118K.

Such "tricky" mathematics improved data on primary benefit claims as well. As a result of revising previous results, they decreased by 6K instead of increasing by 2K.

However, all this positive has not helped the dollar much, as US Treasury yields remain around 2.15%, while the probability of its growth towards 3.0% remains.

Weaker Markit PMI in German and Eurozone manufacturing sectors could push the EUR/USD pair down on Friday 22 October. But they turned out to be multi-colored. The European index turned into the red, dropping from 56.2 to 54.3 against a forecast of 55.2. But the index of the main locomotive of the European housekeeper, Germany, on the contrary, is green at 58.2 against the forecast 56.5.

The fact that the US labour market continues to improve should, in the end, provide more support to the dollar. Fed Governor Jerome Powell has repeatedly stressed that the monetary stimulus (QE) program is aimed at stabilizing the labor market, among other things. This task, although not fully accomplished, is very close to the goal. Consequently, there is nothing preventing the Fed from starting to reduce monetary stimulus in the near future.

So, what to expect from EUR/USD in the near future? Whereas 55% of the oscillators on D1 were painted red, 15% green and 30% neutral grey a week ago, the picture has changed now. 50% of the indicators are pointing up, 20% have taken a neutral position, 15% are looking down, and the remaining 15% are signaling that the pair is overbought. As for trend indicators, their readings have also been affected by the sideways movement of recent days, resulting in a draw of 50% by 50%.

The overwhelming majority of analysts expect the dollar to strengthen by the end of the year. But their opinions are almost equally divided about the forecast for the coming week. 45% of experts vote for the bullish scenario, as much as bearish, and 10% have taken a neutral stance.

As for next week's events, the Eurozone Bank Lending Report which will be published on Tuesday 26 October should be noted. Capital and durable goods orders are due from the US on Wednesday October 27. We are expecting quite a lot of macro statistics on Thursday and Friday, including consumer markets and GDP data from the Eurozone, Germany and the United States. In addition, the European Central Bank will meet on October 28. The interest rate is likely to remain unchanged at 0%. Therefore, the subsequent press conference and commentary by the ECB management on monetary policy is of much greater interest.

GBP/USD: Wherever the Euro Goes, the Pound Goes

Last week's GBP/USD chart is very similar to the EUR/USD chart: sideways movement with some advantage to bulls and finish just above the start level, at 1.3758. This stems from the absence of many serious drivers from the other side of the Atlantic, as well as from the statistics from the UK itself.

UK consumer price growth slowed from 3.2 per cent to 3.1 per cent, which is a good signal for investors fearing global inflation. However, the market has hardly reacted to these figures, keeping a close eye on gas prices, as the energy crisis is now a major threat not only for the United Europe but also for the UK that separated from it. Inflation is certainly very important, but the country is repeating the path already taken by the Eurozone and the United States, where it was followed by strong growth following a slight decline.

The Markit Business Activity Index (PMI) in the British services sector published on Friday, October 22, rose from 55.4 to 58.0 instead of the expected decline. This didn't help the pound. The dollar, with the help of Jerome Powell, who made a speech shortly before the markets closed, strengthened not only against the euro, but also against the British currency.

Unlike its European counterpart, the pound had been growing since September 29. And this could not but affect the readings of the indicators on D1, among which the advantage is still on the side of the green. Among the oscillators, these are 55%, 25% are grey and 20% signal that the pair is overbought. Among the trend indicators, 60% are looking north, 40% have already turned south.

As far as experts are concerned, there is no discernible advantage: 35% vote for the pair's growth, 25% for its decline, and 40% for movement in the side channel.

USD/JPY upgraded its four-year high on October 20 to reach 114.70 high, the very point where it was in November 2017. After that, the enthusiasm of the bulls subsided, and the pair returned to the values of a week ago.

While the dollar has strengthened against the euro and the British pound since Fed Governor Jerome Powell's speech on October 22, it has weakened a bit against the yen as a safe haven currency. As a result, the final chord sounded at around 113.42.

As we know, the pair's performance is strongly influenced by the yield of US government bonds, which hovers around 2.15% so far. However, if it rises, USD/JPY will see a new rise in volatility.

As for the events of the coming week, one could note the meeting of the Bank of Japan, which will be held on the same day as the meeting of the ECB, on Thursday October 28. However, it is highly likely to bring no surprises, and the interest rate will remain negative at minus 0.1% as before. 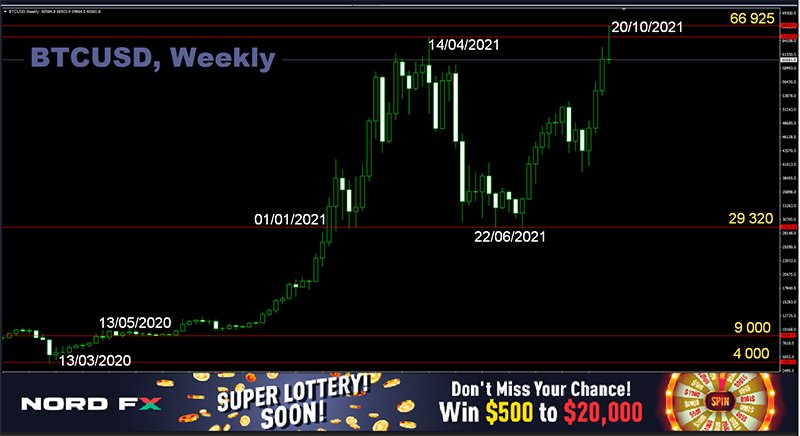 Bitcoin hit $64,850 on April 14, followed by a 55% pullback to $29,230. And now what crypto investors have been waiting for has finally happened. After months of anxiety and anticipation, the BTC/USD pair not only regained what it had lost, but also upgraded its historic high, peaking at $66,925 on October 20. Ethereum also reached its all-time high: the ETH/USD pair was noted at a height of $4,363.

Analysts say the reasons for the current rise are two. The first is the launch of Bitcoin ETFs (exchange-traded investment funds). First, the US Securities and Exchange Commission (SEC) approved a Bitcoin futures ETF from ProShares, followed by approval of VanEck's application to launch a similar ETF.

The second and main reason for the bullish trend was investors' concerns about inflation. Experts at JPMorgan Chase, the largest banking conglomerate, pointed out that real gold, unlike digital gold, has hardly responded to inflationary concerns. This suggests bitcoin's renewed role as the best capital protection tool for investors and supports the bullish outlook for BTC until the end of the year.

Many other analysts agree with JPMorgan Chase, who are optimistic about the performance of the main cryptocurrency until the end of December. But at the same time, they urge investors to be extremely cautious in early 2020 as the big four-year BTC cycle is about to end. So Scion Capital hedge fund founder Michael Burry, who predicted the 2007 mortgage crisis, has already thought about opening a short bitcoin position.

Finder conducted a survey of 50 fintech industry experts with representatives from Cypherpunk Holdings, Bitcoin Reserve, Kraken, Arcane and CryptoQuant, as well as 7 professors, representing universities in Asia, Europe and Australia. In their opinion, the BTC rate will peak at a level slightly above $80,000 within the next two months, and the flagship cryptocurrency will end the year around $71,400.

The levels indicated by these experts turned out to be significantly lower than the forecasts of analysts of Standard Chartered and Bloomberg, who believe bitcoin could exceed $100,000 this year.

Popular crypto analyst Willy Woo believes that the next phase of the bitcoin market will be more volatile than previous bullish periods, implying a longer time frame for the current cycle. recall that this analyst wrote in a series of Twitter posts a year ago that, according to his model, $200,000 per bitcoin by the end of 2021 is a conservative forecast. However, he did not exclude the likelihood that BTC will soar up to $300,000.

Morgan Creek Capital Management CEO Mark Jusko calls the numbers similar to Willie Woo's predictions. He suggests that the price of the oldest cryptocurrency could soar to the level of $250,000, only to happen not in 2021, but in the next 5 years. In doing so, he acknowledged that the path to such a peak may not be easy.

In the meantime, there is a rollback in the crypto market. The most cautious investors close long positions. Bitcoins are also sold by those who bought them at the spring highs. They have earned a little and do not want to risk again. A glitch in the algorithm on the Binance.US exchange added fears as well, when the price immediately collapsed by 87%. However, the performance of other exchanges and brokers was not affected by this, and the BTC/USD pair was trading at $61,000 at the time of writing. The total crypto market capitalization is $2.6 trillion, and the Bitcoin Dominance Index is 45.94%. The Crypto Fear & Greed Index is in the Greed zone at 75 points. However, this does not mean that the market is strongly overbought, and, in the opinion of the index developers, it can still be dangerous to open short positions in this situation.