Bloomberg: The year-end is expected to be bullish for stock markets!

Stock market investors are hoping for a strong conclusion of a chaotic year.

The Fed being less aggressive and reassuring inflation data might cause a mega-rally in December, that is historically the strongest month for stock markets. Although this year it might come later as bulls might remain idle until the next release of the key inflation report on December 13.

Fed Chair Jerome Powell voiced some optimism last Wednesday by signaling a slowdown in the central bank’s pace of rate hiking. The S&P 500 Index gained 3.1% as a result of his words and crossed its 200-day moving average for the first time since April, which is a widely used technical indicator of gauging longer-term price trends. But for the week as a whole, it helped the index to rise by 1.1% only, as traders reacted negatively to an unexpectedly strong jobs report on Friday and an overall risk of rate hikes.

As it was said by Eric Beiley, executive managing director of wealth management at Steward Partners Global Advisory, the stock market has probably already seen the lows, so the end of the Fed’s rate hikes is getting nearer. Bailey added that he suggests the Fed’s rate-hiking campaign to come to an end in the following year, as in early 2023 rate hikes would affect the inflation levels and a slowdown in the global economy. 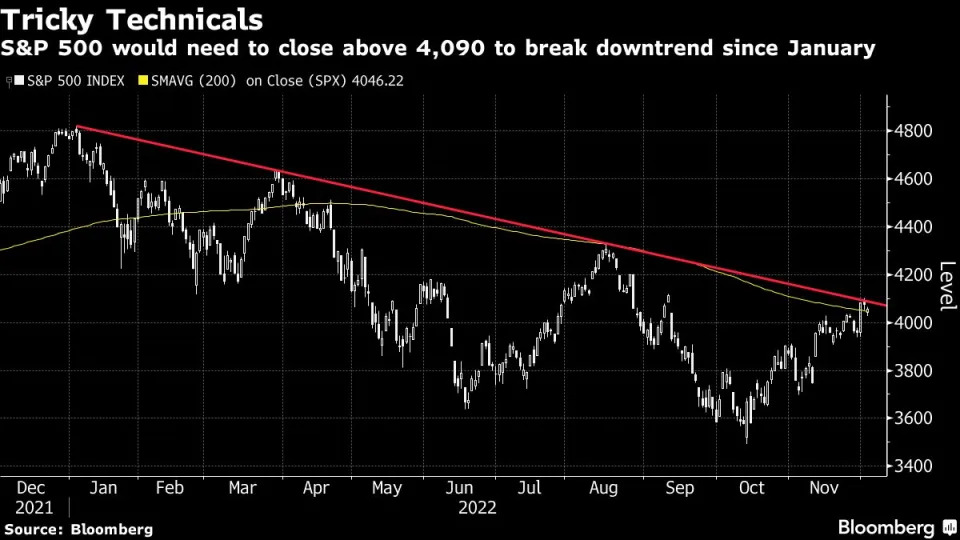 Still, stocks face one more obstacle in a form of the index’s January downtrend. Global market sentiment indicates that this trend is likely to get broken upwards.

The S&P Index is expected to continue its growth until the year-end. Further market prospects are yet uncertain.