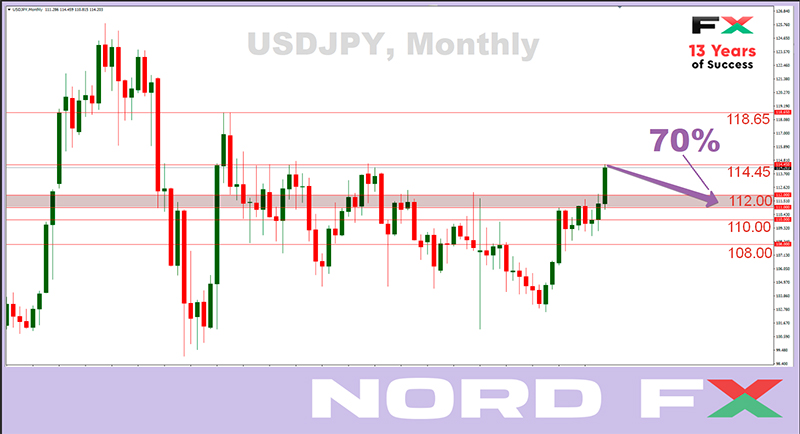 Having reached a local low of 1.1523 on Tuesday October 12, EUR/USD ended a five-week downward marathon, turned, and moved up. Since autumn started, the dollar has won back 385 points from the euro. And is the pan-European currency going to regain losses now?

The situation is actually ambiguous. Some experts expected a much more powerful correction further north. But it didn't happen: the pair managed to rise only to 1.1624 and ended the five-day run at 1.1600.

The week's data show that the US economy continues to recover fairly quickly, increasing to almost 100% the chance that the Fed will start tapering monetary stimulus (QE) program next month.

Initial claims for unemployment benefits in the US fell to 293,000 for the first time since the start of the COVID-19 pandemic (down 36K against 14,000 forecast). And the number of those already receiving benefits, with the forecast of 78 thousand, decreased by 134 thousand: from 2.72 to 2.59 million. Producer prices also showed an increase, from 8.3% to 8.6% (with a forecast of 8.5%). Year-on-year, therefore, inflation of these prices showed the most powerful uptick in history.

It should be noted that the Producer Price Index serves as a leading indicator for consumer prices. And consequently, inflation can be expected to continue rising, bringing the beginning of the end of QE closer. Especially as retail sales released on Friday 15th October were also in the green zone: ­plus 0.7% versus the forecast minus 0.2%.

And here the question arises: if everything is so good in the US economy, why hasn't the pair continued its precipitous decline? Grasping at straws, euro-bulls are likely still hoping that the winding down of the fiscal stimulus program will be delayed at least until December. This is supported by the jump in stock indices: the S&P500 rose 3 per cent in the second half of the week (its highest gain in seven months) and the Dow Jones rose 3.4 per cent. This index has not seen such a big break in almost three months.

So what to expect from EUR/USD in the near future? Continuation of the downtrend after the correction? A stronger euro and an upward trend reversal? Or respite in the side channel?

For next week's events, the European Council meeting on Thursday October 21 and the Markit Manufacturing PMI in Germany and in the Eurozone as a whole on October 22 can be noted. The decision of the People's Bank of China on the interest rate, which will be made public on Wednesday, October 20, may also rock the pair.

GBP/USD: The Victory Is with the Pound So Far

Unlike its European neighbour, the British pound continues to strengthen actively against the dollar: the GBP/USD pair showed a 360-point gain (from 1.3412 to 1.3772) since September 29 and finished at 1.3744. The reason for this dynamic is understandable and lies in the Bank of England's intention to start tightening monetary policy and raising interest rates considerably in the foreseeable future.

As we have already written, according to Citibank experts, the pound is currently supported by the following factors. First is the UK's success in the fight against COVID-19. Secondly, the reduction of political risks associated with the negotiations between the EU and the UK on the Northern Ireland Protocol and the rejection of the referendum on the independence of Scotland. And of course, this is the decision of the Bank of England on a possible increase in the key interest rate to 0.25% in May 2022 and to 0.50% in December. Such prospects for UK monetary policy, according to Citibank analysts, are “well placed to confront Fed policy”, which is what we have seen during October.

Among the indicators, a significant advantage is still on the side of the green. 60% of oscillators and 100% of trend indicators indicate the continuation of the uptrend on the daily timeframe. 25% of oscillators signal that the pair is overbought, and 15% are in a neutral position.

As for the economic calendar for the coming week, attention should be paid to such an important measure of inflation as the UK CPI (due on Wednesday October 20), as well as Markit's UK services PMI to be released on Friday October 22. 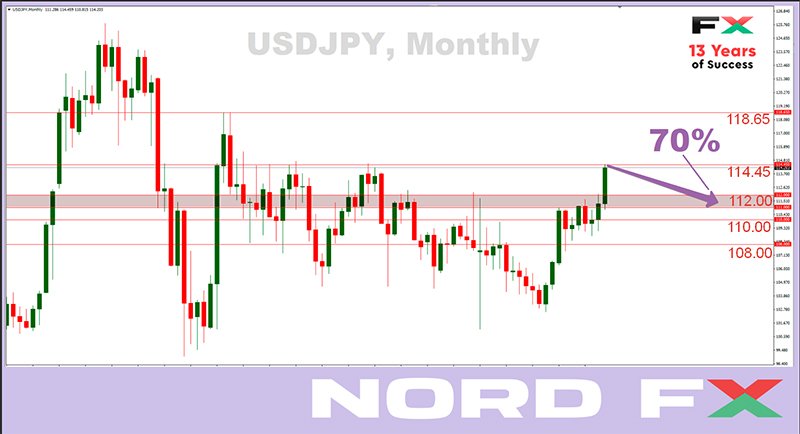 There is such an expression in Latin, Per aspera ad astra, the authorship is attributed to the ancient Roman philosopher Lucius Anna Seneca. It literally translates as "Through hardships to the stars” and means "Through difficulties to victory." This is exactly what the USD/JPY bulls won.

Most experts expected that they would not calm down until they took the 112.00 height by storm. And now, finally, their months-long efforts have succeeded. And in a great way. After jumping 222 points over the week, the pair reached a height of 114.45 on Friday October 15, and the last chord was slightly lower at 114.21, near the upper limit of the trade range since the beginning of 2017.

Such a fiasco of the Japanese currency is fully consistent with its role as a haven currency and reflects a stable inverse relationship between its rate and the demand for risks. The growing interest of investors in the American and Japanese stock markets (the Japanese stock index Nikkei 225 grew in parallel with the S&P 500) dealt a strong blow to the yen. A pullback in energy prices, which the country mostly imports, supported the market's appetite for Japanese stocks as well.

According to Japanese Finance Minister Shunichi Suzuki, the weak yen supports exporters, but inflates import costs for a number of companies and consumers. At the same time, he said that the stability in the Forex market is important for the government, and it closely monitors the impact of exchange rates on the Japanese economy. But the minister refused to comment directly on the current situation.

However, the yen's fall in two weeks of October looks too fast against the background of the dynamics of the last five months. And this could be the reason for a strong correction of the USD/JPY pair to the south. So 70% of analysts believe that the pair will return to the 111.00-112.00 zone within the next three to five weeks. However, the bulls will have the advantage in the short term. According to 55% of experts, the continued interest of investors in the stock market could lead to further weakening of the Japanese currency.

China-related news almost reversed the bitcoin trend south again on Wednesday, October 13. Binance, the largest cryptocurrency exchange, has announced, following other exchanges, that it will stop serving Chinese clients and remove the yuan from the list of supported currencies as of December 31.

Prior to Beijing's repressions, residents of this country formed one of the major parts of the crypto community, with the country leading bitcoin mining. Back in 2020, its share was 50-60% of the global hash rate. The situation has changed dramatically since then and, according to Cambridge University, the top three in crypto mining are now the United States (35.4%), Kazakhstan (18.1%) and Russia (11.2%).

If you look at the map, you can see that the last two of these countries have a land border with China, which made it possible to move numerous mining equipment there. As a result, illegal miners in some Russian border regions have increased annual electricity consumption by 160%.

Time will tell whether China will win or lose from the imposed bans. This applies to other countries as well, some of which seek to tighten legislation in this area as much as possible, while others are very loyal to digital assets. For example, Director of US National Intelligence John Ratcliffe sent a letter to the SEC chairman last year asking him not to restrict the activities of US miners. There is no need to talk about El Salvador, which recognized bitcoin as the official currency.

Interestingly, this decision was heavily criticized by ethereum creator Vitalik Buterin. “Shame on everyone (okay, I'll name the main culprits: shame on bitcoin maximalists) who praise him [El Salvador President Nayib Bukele] without any criticism,” Buterin wrote on Reddit. And he stressed that the process of forcibly integrating digital assets into the financial system “runs counter to the ideals of freedom that should be appreciated by members of the cryptocurrency community. In addition, the tactic of simultaneously distributing BTC to millions of El Salvadorians with little or no prior training is reckless and fraught with the risk of large numbers of innocent people being hacked or tricked."

The Capgemini Research Institute is also concerned with the question of how widely cryptocurrencies have entered the life of ordinary people. In addition to surveys conducted in many countries, it examined statistics from the Bank for International Settlements, the European Central Bank, the International Monetary Fund, the World Bank and other central banks.

Capgemini noted that less than 10% of consumers currently use cryptocurrency for payments. However, the institute predicts that nearly 45% of customers will use this new payment method in one to two years. This trend will be supported by the growing demand for international payments and the reluctance to pay high transaction fees.

If the world's leading powers don't start chasing bitcoin after China, the flagship cryptocurrency has a lot of chances to to bypass leading corporations and even entire sectors of the world economy in terms of capitalization.

Bitcoin continued to delight investors over the past week. Over the seven days, the BTC/USD pair rose 16% to reach a local high of $62,880. Projections supported by many experts suggest that it will soon test the historic high of $64,810 on April 14. If successful, taking into account the statistical volatility, the pair will reach the $68,000, followed by a serious correction associated with massive profit taking.

However, despite a possible pullback, the mid-term outlook for this pair remains positive. The next major resistance level is located in the $80,000-81,000 area. American Crypto Exchange Kraken experts believe that the price of the flagship asset could reach $100,000 by the end of 2021. Based on the analysis of the dynamics of previous years, a calculation was made, according to which, the price of bitcoin tends to grow during the fourth quarter of any year. During this period, "the average and median returns reached +119% and +58%, respectively." If the average return of the previous 2020 year recurs, BTC could end the year close to $100,000. More precisely, around $96,000. However, if we see not the average, but the median profitability, Kraken experts write, then the price of bitcoin will rise to about $70,000.

The Crypto Fear & Greed Index climbed from the Fear Zone to the Greed Zone in the two weeks of October to reach 71 points. However, this does not mean that the market is strongly overbought, and, in the opinion of the index developers, it can still be dangerous to open short positions in this situation.