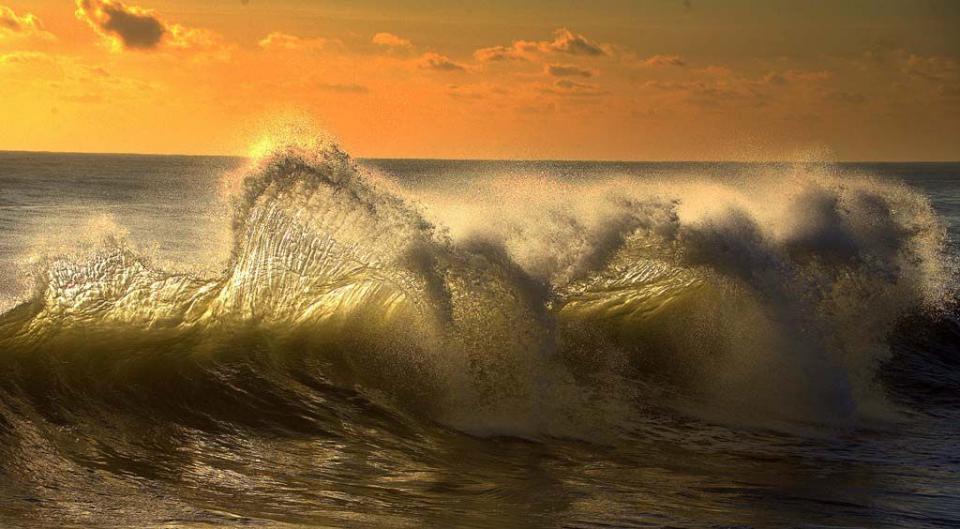 Let’s talk about the Bill Williams Awesome Oscillator in the article.

The author in his book titled “New Trading Dimension” writes the following about his creation: “It is, without doubts, the best momentum indicator available in the stock and commodity markets”. “If you really know how to use this indicator, it should be worth at least seven figures to you in the next few years.”

An indicator of Awesome Oscillator (АО) is used to measure the power of price movement and it is based on two simple moving averages (SMA). On charts, it is drawn in form of the colorful histogram which is separated by the zero line. Bars of the histogram can be higher or lower the zero value and can change the color depending on the direction of changes in parameters:

In the calculation of the rapid and slow moving averages, the median price is used  (the arithmetic average from the maximum and minimum values of the candlestick):

Periods of moving averages are fixed (5 and 34) and do not involve settings.

The Awesome oscillator shows changes in the dynamics of the price movement. The more intensive the price moves, the larger the gap is between the rapid and the slow moving averages, and the longer the columns of the oscillator’s histogram.

Along with the indicator, Bill Williams suggested variants of its application. It is three patterns which can be shown by the oscillator’s bar histogram:

A Saucer forms when three consequent columns appear on the histogram, the first two are the same color and the third one is another color. Thus, the second (middle) column is shorter the two last columns. We seek buy signals in the positive area of the histogram and we seek sell signals in the negative area.

The Zero Line Cross is interpreted by the following way:

A sell signal is given by the two consecutive maximums with the second maximum slightly below the first one and the gap between them is not in the negative histogram area.

Let us test the «Saucer», «Zero Line Cross» and «Two Peaks» signals against a large amount of historical data of various financial instruments and on the basis of two timeframes.

Now, we specify conditions of closing a trading position.

The lifetime of the position is set at 5 or 10 (in candlesticks) in all cases.

Analysis of the Results

First, we will estimate the results based on the sample size.

The total number of candlesticks and events:

Next, we discover the share of events in % in the total number of initial candlesticks on the basis of timeframes:

Now, we turn to the results of performance of trading signals obtained through the formed «Saucers», «Zero Lines Crosses», and «Two Peaks».

We will assess the results with the two following criteria:

Let us see the results based on holding positions and timeframes.

«H1 / 5», fixing a position at the 5th candlestick over the 1-hour timeframe;

Let us summarize the Results using the following diagrams: