The Hammer Pattern is a Reversal Model. Is It Really So? 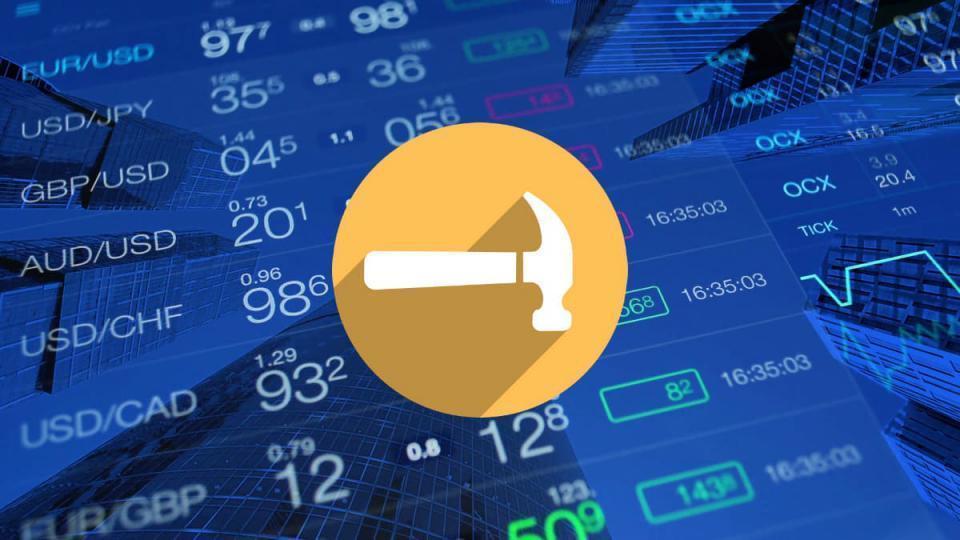 In the following series of articles, we are going to talk about such issues of great interest as chart patterns.

And we are beginning the series of articles devoted to chart patterns with the most famous pattern for all traders - the Hammer. Let's make it clear right away that there are many author-specific sources, schools, and directions where this pattern is called completely differently, which does not change its essence.

So, the following is what we mean by the Hammer in the rest of our research:

First, the Hammer must be preceded by two candlesticks with successively declining lows. With the Hammer itself, the low should also be below the low of the previous candlesticks. For the given example, we show a downtrend, and the Hammer here will be a reversal pattern for an upward movement.

Secondly, the distance from the lower border of the candlestick body to its high should be at least half of the height of the entire candlestick. At the same time, the color of the bodies of both the Hammer candlestick itself and its predecessors does not matter (the figure shows, for example, a situation when the open is higher than the close for all the three candlesticks).

Thirdly, we will assume that the two above-mentioned conditions are also true for the opposite (mirror situation) - Inverted hammer - a reversal pattern that is formed in a growing market. Steve Neeson, by the way, calls such pattern a Shooting star. But in order not to confuse the reader with unnecessary complications, we will also call it the Hammer for simplicity and convenience, since it does not really matter where the pattern is formed - at the top or the bottom of the price chart.

We suggest testing the resulting pattern on a large volume of historical data of completely different financial instruments and in the context of two timeframes.

In addition, we suggest testing the Hammer in three of its combinations, namely by adjusting the conditional parameter of the "body" of the candlestick. For convenience, let's conditionally call it T, and by it we mean the body of the candlestick plus a small tail, which may not exist if the open or the close coincide with the high.

So, we will consider the following combinations:

We introduced such combinations to determine whether the effectiveness of the Hammer will increase as the ratio "T" to the candlestick height decreases.

Now we are going to stipulate the conditions for opening and closing a trading position:

If the Hammer is formed, then open a buy (or sell) position at the open of the next candlestick.

Let us present the obtained six Hammer combinations for further testing in the form of a short table:

Having defined all the conditions and setting the necessary parameters, let's start testing!

Analysis of the results

First, we are going to estimate the results by the size of the obtained sample.

Based on the results of the grouping, we can conclude that, regardless of the types of financial instruments, the distribution of the Hammers is approximately the same, namely:

Now let's turn to the results of the trading signals processing, received as a result of the formed Hammers.

We are going to evaluate the results according to two criteria:

Momentum in % and share of profitable positions in % in the context of holding positions, timeframes and Hammer parameters:

Momentum in % and share of profitable positions in % by types of financial instruments:

8 out of 11 average momentum values are positive in terms of parameters.

At the same time, some features can be highlighted.

To do this, let us visualize the results in the form of momentum distribution (m) relative to each considered parameter (position closing candlestick, timeframe, Hammer parameter, type of financial instruments).

The diagram above shows the momentum distribution depending on the parameters under consideration. The diagram consists of two parts: "box" and "tails" or "whiskers". 50% of the observed values ​​are placed in the box, the remaining 50 are represented by tails. The end of the lower tail represents the smallest observed value, and the end of the upper tail represents the largest one. The cross shows the average value.

Analysis of the results allows us to draw the following preliminary conclusions:

Let's see how the Hammers have shown themselves in terms of the timing of holding positions, timeframes and types of financial instruments.

We are going to accept the following abbreviations:

We see that the best impulse of 0.931% is shown by the Hammer signals on the daily timeframe, with the Hammer body not exceeding 10% and when fixing the position on the 10th candlestick (all types of financial instruments, especially currency pairs, are profitable).

The detailed results are presented in the appendix: