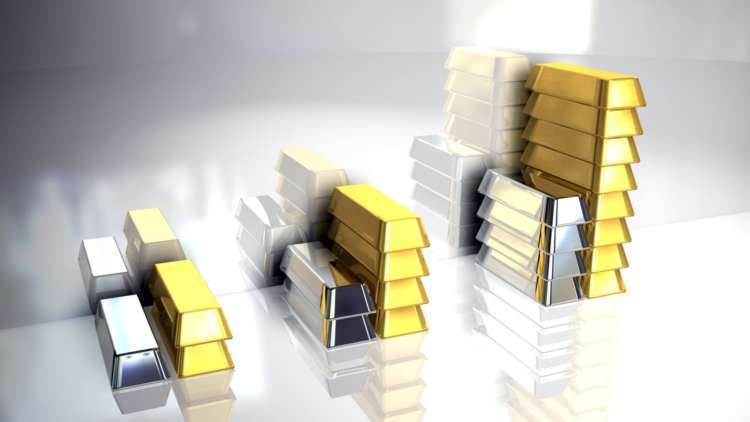 Previous studies have considered how the price ratio of two metals - copper and gold- can affect the quotes of world stock indices. Today, we will study whether it is possible to create an effective trading strategy based on the gold/silver price ratio.

The gold/silver ratio shows how many ounces of silver equals 1 ounce of gold at the current market price level. As a rule, during periods of economic growth, the ratio decreases, and during crises it grows.

In recent decades, the gold/silver ratio has been moving in a wide flat within 80 and 50, rarely going beyond these limits. Reaching the limits of the flat often signals a local high or low of quotes of one of the metals, which, with a high degree of probability, may be followed by a price reversal (and, as a result, the ratio itself) in the opposite direction.

Entering the market - buying gold and selling silver at the opening of the next trading day, if the gold/silver ratio is less than the lower threshold (betting on a growth of the ratio).

Entering the market - selling gold and buying silver at the opening of the next trading day, if the gold/silver ratio is above the upper threshold (betting on a fall of the ratio).

There are 6 upper/lower threshold options in total.

Exit from the market - a reverse transaction at the close of the trading day (if the first transaction is a buying, then exit through a selling, and vice versa):

The average rate of return (R) of a financial instrument is calculated using the formula:

It can be seen that the gold/silver ratio exit from the range of 80-50 is almost always impulsive (except for the period in the early 1990s). Accordingly, this is followed by a rather sharp return of the ratio back to the specified range. Let's see how effective a trading strategy will be, which is based on the premise of a regular return of the gold/silver ratio to the previously traded range.

For variable parameters, the following designations are used: 80 - 70; where:

The minimum acceptable level of average rate of return of 0.3% corresponds to a strategy with exit options on the 10th and 15th day after entering a transaction at any levels of the gold/silver ratio.

Next, consider the strategy’s results with exiting the transaction on the opposite signal, i.e. when the gold/silver ratio has become less/greater than the threshold, at the intersection of which a transaction was opened.

The strategy shows a very low level of maximum drawdown: from 0.9% to 1.98%. This is achieved due to strict conditions for exiting the transaction: the potential loss is not fixed until the gold/silver ratio returns to the level at which the trade was opened. I.e. the position can be held for a long time (up to several years in some cases), exit conditions on the opposite signal make it almost impossible to close the transaction with a loss.